The following article appeared in the July ’05 issue of The Essential Herbal Magazine, written by Maryanne Schwartz. The original idea was posted by Iben on The Soap Dish Forum.
Some people use different oils with good results, but we love the coconut because of the added sudsing action. Although one would expect so much coconut to be somewhat drying, we haven’t found that to be the case (perhaps because of the water softening properties of the soap), and in fact many of our “test subjects” prefer the spa bars to the regular soap. I’ve been reading that others are finding it helpful for eczema, but that is anecdotal information.

SALT SOAP – SPA BARS
Well, as usual, one of us saw a recipe for something different. This time it was Tina. She started talking about this salt soap and even emailed the information to me. It sounded so strange that I was sure, even after seeing the info that it was a melt and pour soap with salt added and we'd tried that before. When she finally got through to me that it was really something different, we just had to try it.

Here's what we did: We call these "Canyon Soaps". The red of the clay and the rough texture that the salt gives the soap made us think of canyon walls. 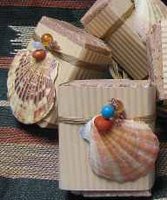 By the time the oil is melted, the lye was cool enough to use and we mixed it, I'm not sure if it was even tracing, just well mixed and we added:

This traces FAST (you'll see!) and you basically glop it into the mold as soon as you can. It heats up and goes to gel almost at once. We went for a walk in the woods and it was pretty much ready to unmold when we got back... maybe an hour! It was still warm (even somewhat hot) when we sliced it up. It is a bit crumbly around the edges, but hardens up and the soap itself is heavy. If you plan to bevel the edges at all, do it now.We tried it out almost immediately! It has gotten much milder since then (really needed to rest for a while to continue the cure), but the bubbles are almost like lotion, rather than big and fluffy.

After the success of the first soap, we tried a second. We made it almost the same, but added Bentonite clay instead of the red clay and a little Hydrated Chromium Oxide for the green color. This one came out a seafoam green and we decided it would be called “Mermaid's Treasure”. 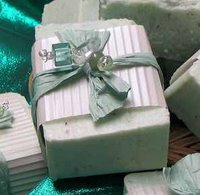 This is really a different kind of soap. Heavy, textured and the speed that it sets up is just fun and amazing. After doing soap in a production mode for so long, it's just such fun to try something with a new twist.

To see more variations, check out The Sibling Group!
Posted by Tina Sams at 6:04 AM

Just curious if you added clay in order to try to offset the bar drawing moisture from the air. If so did it work? Thanks

Well, we used it mostly for color. The bars still do draw moisture, but now that you mention it, not as much as salt bars we've made without clay. Wow! Never thought about that, Cory.

I am ready to go cut my salt bar - that was a fun read! THANKS!

How long did you let the salt bar cure? I just made a batch and not sure how long I should wait before use.

It needs to cure as long as a regular bar of soap, and gets milder with time. A month is a good time.

That is so strange! I mean I knew that I should never use more than 30% coconut oil in a butter recipe. Isn't this soap too harsh for the skin? Or are we allowed to make a 100% coconut oil soap because of the salt we're using?

:-) the rules are only guidelines, and they have only existed for 20 years or so.
Experimentation is how they come about!
This soap is great in the summer, but I don't use it much in winter when my skin is drier.

I ran the recipe through soapcalc and to use 4.5 ounces of NaOH to 25 ounces of coconut oil this recipe was superfatted at 1.6%. For a coconut oil soap recipe that seems abnormal? I have read that people up to 10 times as much for saltbars... especially 100% coconut soaps... at least 6% superfat is more normal?

Your soaps are wonderful... beautiful! I just responded because I always run any recipe through soapcalc myself and this one seemed odd.

It may be that since the combination of fats and lye combine to create a salt, the addition of salt into the bars would change the results of soapcalc, which doesn't take that into account...
On the other hand, this was written in '05 when salt bars were brand new. In the time since then, people have done a lot of work on the recipe to change it to suit them.
You can certainly add more oil to the recipe, and maybe if we did that I'd like them more in winter :-).

Hi
I've made salt bars before and absolutely love them. Your recipe calls for more sodium hydroxide and salt than I would have used, but I'll give it a try and see how it compares.

I am not sure I can find pretzel salt locally as we don't have a large German population & Amazon seems pricy. Can other salts be substituted like pink Himalayan which I can find in bulk?

Sure!
We wrote this up 12 years ago, and at that time it was way easier to find pretzel salt than it was pink salt. Now that has reversed :-) 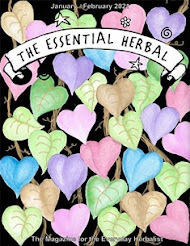