The Healing Power of Herbs - Released!

In early July of last year I started writing, and here we are in the very beginning of the new year already printed and released.  I LOVED this schedule.  It fit between magazine deadlines! I really like the way the book turned out, too.
Here are some visuals (because I have talked enough about this)... 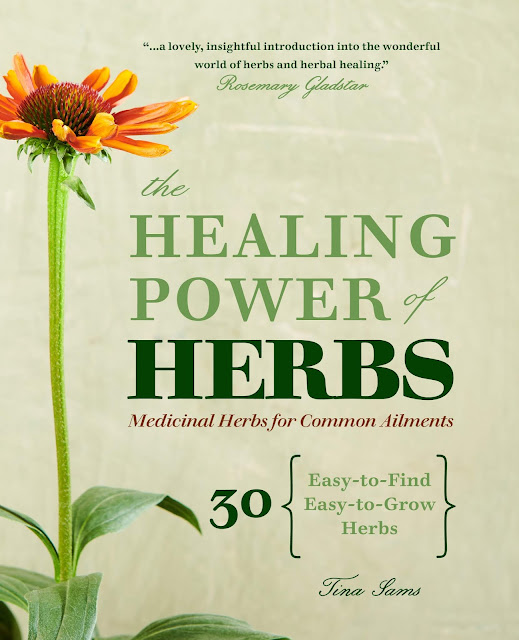 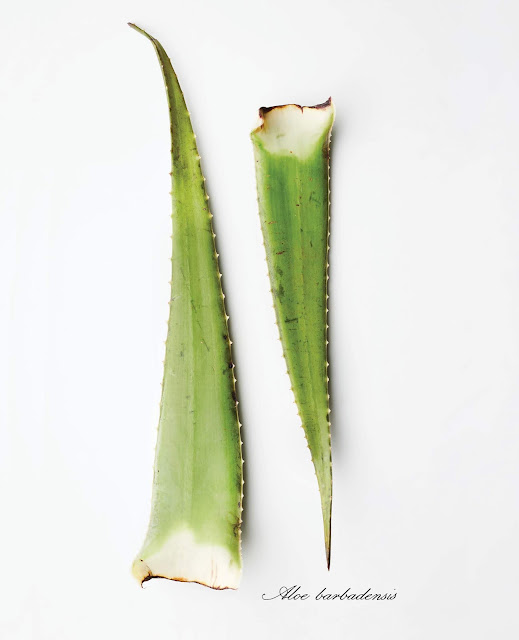 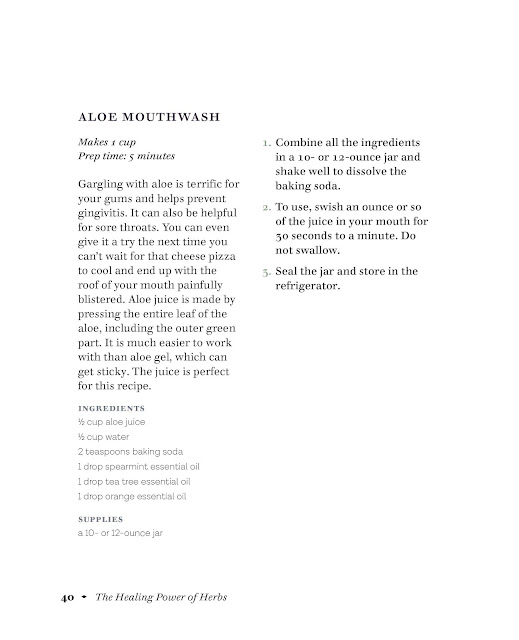 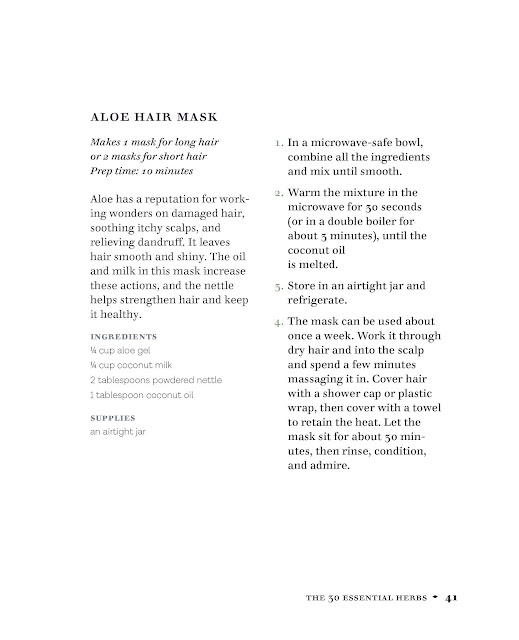 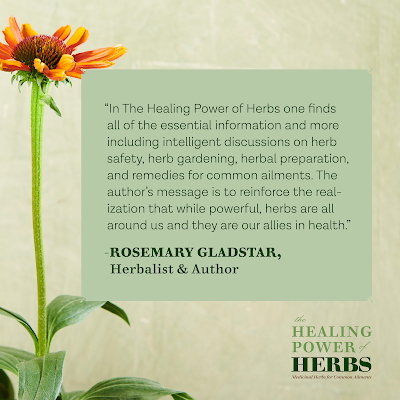 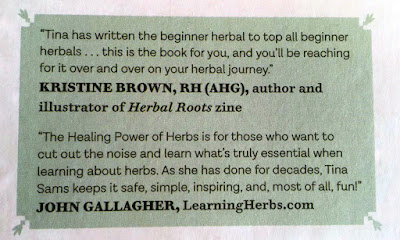 It is now available.
You can purchase it from The Essential Herbal
It is available on Amazon
OR
Ask your local bookstore to get a few copies!  Keep those bookstores alive!
Posted by Tina Sams at 8:40 AM No comments:

Initially, I shared this issue to thank folks for sticking around while I posted incessantly about the new books (see the end of post).  It was very well received, so I'm sharing it further.  It's a couple of years old, but still an excellent example of what we do here.  Please enjoy, and if you like it, share it!

What book, you ask???
The Healing Power of Herbs! 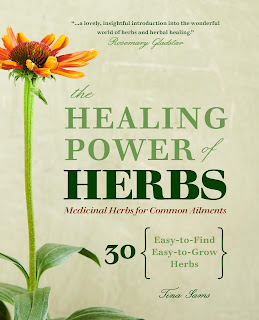 Warm Up with Ginger

The legends of the ancient world abound with stories of the magical powers of spices, ginger being among them.  It grew extensively in China, and was one of the spices revered by Emperor Shen-Nung, founder of Chinese medicine, who lived in about 2800 BC.  He consumed large quantities of ground spices each day to preserve health and prolong his life.

In 550 BC Confucius advised his followers not to eat any food that was not properly flavored with spices.  Ships traveling between ports at that time carried pots of fresh ginger to prevent scurvy among the sailors.  In early practices of Chinese medicine ginger was recommended as a heart strengthener.

In early Hindu medicine ginger was used to treat liver problems, rheumatism and jaundice.  Given the approval of Islam, it was mentioned in the Koran as a medicine.  The Greek physician Dioscorides referred to ginger’s warming effect on the stomach as an aid to digestion and an antidote to poison.  The English have always been taken with ginger.  Henry VIII ate huge quantities of it to protect against the plague.  American Indians made a decoction of root ginger for stomach upsets.  Ginger is part of many cures for the common cold.  One is a blend of ginger, white horseradish, hyssop and coltsfoot.  Another is a mixture of ground ginger, cinnamon, mustard seed and cayenne pepper  made into a paste with honey.  This is smeared on a piece of flannel and is placed on the chest and covered with warm clothing.  This is said to relieve chest congestion.

To enjoy the soothing powers of ginger, make a tea: 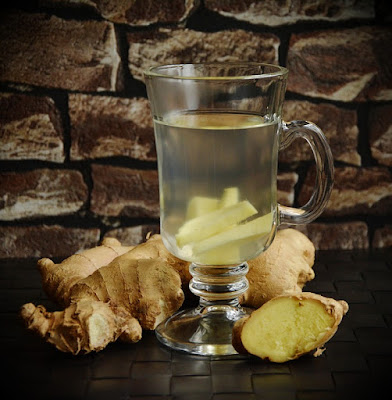 Put the bruised root or powder in a pot and pour boiling water over it.  Let set for ½ hour, strain liquid, and allow to cool.  Take 2 tbsp. at a time.

In addition to the medicinal attributes of ginger, it is used extensively in cooking and baking, and is available in several forms.  Fresh ginger is the type sold in grocery stores.  The smooth skin is tan colored.  The texture is crunchy with a strong scent.  Do not buy ginger with wrinkled skin, as it will not be fresh.  To store fresh ginger, wrap it first in paper towel, then tightly in plastic wrap.  It should keep this way in the refrigerator for about 2 weeks.  Preserved ginger is cooked and packed in heavy sugar syrup.  It can be used in baking or is delicious spooned over fruit.  Crystallized ginger, also known as candied ginger is cooked in a sweet syrup, cooled, and coated in sugar.  It can be nibbled as a candy, or added to cookie recipes.  Ground ginger has a different flavor and is not as pungent or strong.  It should not be substituted for fresh gingers.  It is excellent for  gingerbread, spice cake,  or gingerbread cutouts at Christmastime.

Ginger is grown in several locations around the world.  In their travels the Portuguese planted it down the coast of Africa, so now it is produced in Sierra Leone and Nigeria.  Further afield, it grows in Thailand, Taiwan, Australia and China.  The Spanish planted the rhizomes in Jamaica.  Jamaican ginger is considered the finest in the world.  The majority of ginger imported to the U.S. is from Jamaica.  England and the U.S. are the biggest users of the spice. 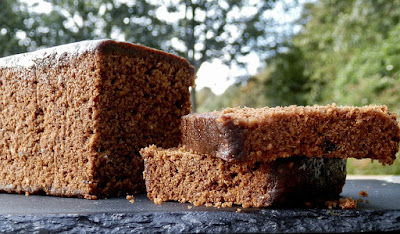 Preheat over to 350 degrees.  Mix together the butter, molasses and eggs.  Sift the flour, baking powder, spices and salt into another bowl.  Stir in oats.  Gradually mix in the molasses mixture and sour cream.  Fold in raisins and walnuts.  Spoon the batter into a loaf pan.  Bake for 1 hour or until toothpick inserted in center comes out clean.  Cool in pan for 10 minutes then turn out on rack and cool. 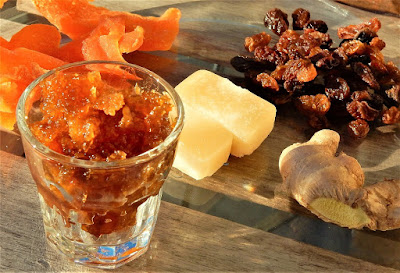 Put the nectarines, apples, lemon rind and juice, sugar, walnuts, raisins, ginger, garlic, peppercorns, cayenne, cinnamon and half the vinegar in a saucepan.  Stir well and bring to a boil.  Simmer for 30 minutes, stirring occasionally.  Stir in the remaining vinegar and continue simmering, stirring occasionally for 1-1/2 hours or until the chutney is thick.  Ladle into jars.  Label and store in refrigerator. 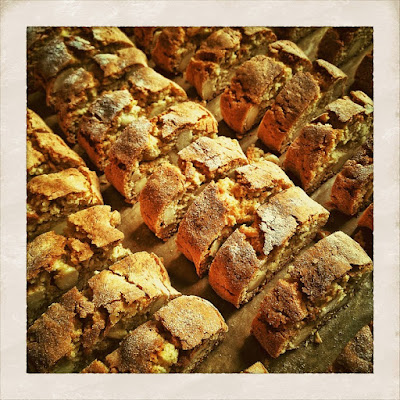 Preheat oven to 350 degrees.  Line a heavy baking sheet with parchment paper.  Whisk the flour and baking powder in a medium bowl to blend.  Using an electric mixer, beat the sugar, butter, lemon zest, and salt in a large bowl.  Beat in the eggs, 1 at a time.  Add the flour mixture an beat just until blended.  Stir in walnuts and ginger.

Form the dough into a 13-inch long and 3-inch wide log on the prepared baking sheet.  Bake until light golden brown, about 40 minutes.  Cool 30 minutes.

Place the log on the cutting board.  Using a sharp serrated knife, cut the log on a diagonal into 1/2 to 3/4 inch slices.  Arrange the biscotti, cut side down, on the baking sheet.  Bake the biscotti until they are pale golden, about 15 minutes.  Transfer the biscotti to a rack and cool completely.  Store in airtight container for up to 4 days.

Slough Off the Old, in With the New You

Winter has a terrible way of making our skin suffer so, from wind burn to dehydration, lack of vitamin D.  Not to mention all the covering up one must do that doesn't allow our skin to just breathe, no wonder after the winter season our skin is looking a little worse for wear.
It's nice to include a simple facial scrub that is gentle enough you can use it daily or a couple times a week as needed. Very easy to do with few ingredients and can be whipped up in a matter of minutes. Since this scrub is completely natural with no preservatives you must keep it in the fridge and use up within a week. It is for this reason we only make small batches. If you need to use it up, it can also double as a scrub on rough parts of the body as well.

If you have a nut allergy you can replace the nuts with soybeans or even powdered peach or avocado pit. It is best to use raw because of the natural oils contained within the nut that will be released once you purée the nuts and add benefit to your scrub. 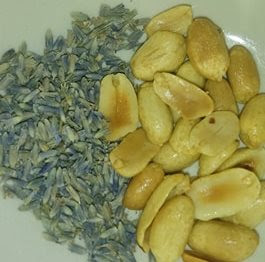 - Powder lavender buds and set aside.  Powder raw nuts in a coffee grinder until you get a smooth consistency.  Any nuts can be used.
- Combine two together until you get a powdery mealy kind of texture. Kind of like when combining shortbread and it's crumbly but can hold together when you clump it together.
- Add two tbsp of raw honey as it will have healthy properties not boiled off in the heating process of pasteurization.  Combine all together until it forms a nice thick paste.  Keep in a small glass jar covered. 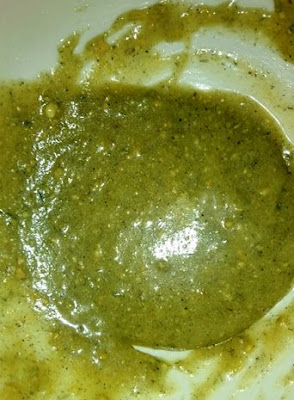 - When applying to the face it's important to remember that adding fingers to the container introduces pathogens and contaminates the scrub, so it's always best to take a clean teaspoon and take a level amount onto your hand and disperse it all around your cheeks, chin, nose temples and forehead. Avoid eye area.
-You might also find that this scrub drags a little from the honey, so what I do is add a touch of warm water to the tips of my fingers, you only need to moisten them a little bit and then rub the scrub in circular motions all around  your face for about 2 minutes.
- Wash off using a warm cloth as it's very easy to remove and since the ingredients are powdered, it won't clog your drain.
- If you find your skin needs more oils, then add half a teaspoon of grapeseed oil and thst should also take care of the dragging issue and you won't need to moisten your fingertips.   I wouldn't put a high end oil in this as it is a wash off product and those expensive oils would be best as a leave on serum instead.
Happy scrubbing. 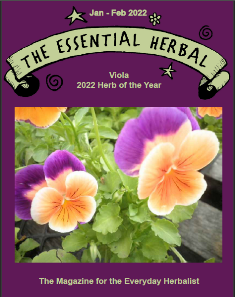