Exploring the Russian Market in D.C.

About two weeks ago I went down to DC to meet up with some friends and have a fun, touristy weekend. Unfortunately it rained the entire time and was almost always freezing. So when we would go out into the elements to forage for food I would usually try to find little store or small tourist center to explore. My favorite place was the Russian restaurant and market. I’ve always been a bit of a Russophile and jumped on the opportunity to explore new cuisine and all the shelves of black bread, kefir, and (my favorite) chocolate. To anyone who has never tried Russian food I highly suggest it. You will not love everything but you will find one or two things that you will obsess over for the rest of your days.

For me, that thing was NOT red caviar on puffed pastries. They looked and sounded absolutely wonderful and I was thrilled to finally give the delicacy a try. I regret to say I was not a fan. There was cream cheese everywhere, it tasted fishy without the texture of fish, and I ended up eating the fancy cucumber art while my friends ate the rest (luckily). The entrée definitely made up for my first experience. I had a simple piece of salmon with grilled veggies that were marinated in “traditional Russian spices.” From what I gathered that meant a surprising amount of anise, some sea salt, black pepper, and parsley. It was simple but absolutely delicious.

After our meal we went to the market and Ken had to practically drag me out kicking and screaming. I could have easily spent all day in the tiny market asking the poor woman “what did what,” and “why use this for that?” Luckily both the woman behind the cash register and my friends were very patient with me. 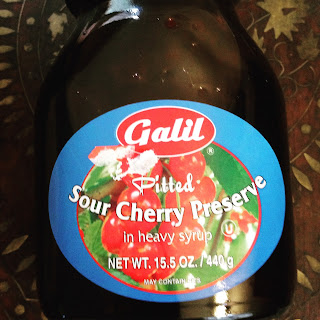 The first thing I saw were sour cherry preserves and I immediately thought of my mother and began looking through the shelves for the best option. Of course that was difficult to find since I don’t speak Cyrillic but I think I managed. 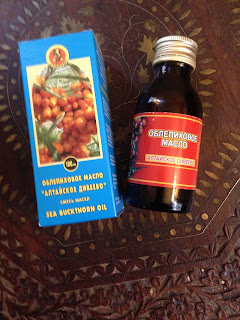 Once I had made my way out of the canning products I saw their little shelf of home remedies. One bottle that intrigued me was sea-buckthorn oil. It came in a sweet little bottle and I thought, “hey why not?” and when I went up to the counter to ask the woman about the product she explained to me that it was full of anti-carcinogenic properties and was full of minerals. I don’t know if I will ever use the contents of the bottle but I’m glad I bought it nevertheless.

I also found the cutest little bottle that I now refer to as random green oil. My mother and I have a guess it is plantain oil because of its emerald hue and use on bug bites but the woman could not give me a definitive answer. Again, I’m simply thrilled to have it – even if I never actually use it. 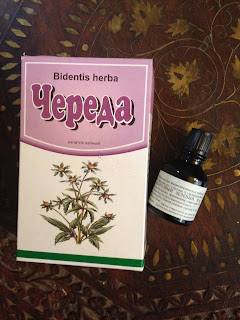 Finally I found tea that was simply called “bastard agrimony.” After looking it up online it is apparently similar to agrimony in affects but not in shape. The box I purchased was full of loose tea and I’m excited to give it a whirl. I will let you all know what I think.

And of course there was the chocolate. I. Loved. The. Chocolate. While the little Russian girl on the label was, unnerving, the chocolate behind her visage was absolutely delicious. There were plenty of other chocolates filled with fruit, liquors, and heaven knows what else but I went for the classic milk. Unless you’ve had Russian Chocolate before I suggest doing the same. Even the milk is still darker than what Americans are used to and it is not as oily as American chocolate. 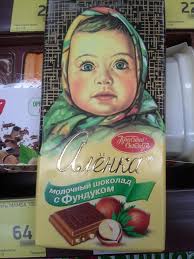 All in all it was a fun, unexpected experience that I would suggest to anyone running around the greater DC area. Now if I could just get my hands on that Vladimir Lenin flower vase they had…

This, That, and Oh Yeah... That Other Thing

This entry is more of a newsletter than a blog post.

We're running a sweet sale right now until the end of March on all of our downloadable books and back issues.  Type the word  spring  into the coupon code at check-out, and receive 30% off the price.  www.EssentialHerbal.com
This is a great time to read up and make those lists before heading out to the herb shows and festivals!  Speaking of which...

Maryanne and I are doing a workshop at the PA Herb Festival on healing herbal vinegars, like 4 Thieves and Fire Cider.  You must pre-register and pre-pay, and can do so at this LINK 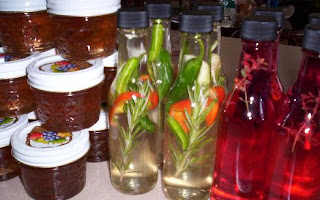 When we process your purchases, it is EXTREMELY important that you have given us the correct information from your credit card.  If it is incorrect, our processor will not allow the charge to go through.  If you check your statement online, it will appear as "pending" but will not go through - and we will not be paid for the purchase.
SO...If we ask you to check the ZIP CODE to be sure that it matches what your credit card company has on file, it is because we need it.  If we ask you to check the EXPIRATION DATE and the CCV CODE as well, it is because we know that one of those three pieces of information has been given to us incorrectly.  Usually a typo, sometimes an error, but no matter how many times we "try running it again," if you don't give us the correct information, we will not be paid for the order.
<>smoothing feathers<>  Thank you.
Posted by Tina Sams at 8:09 AM No comments:

That’s My Bag: What I keep in my bag for spring