Cat Stevens was part of the soundtrack of my youth, and every time there is a particularly beautiful day, the song "Morning has broken" plays in my head as I sit in my office looking out over the acres and acres that stretch before me. Sometime in my late 30's, I was surprised to find the song on the program in a church one Sunday. I liked Cat's version better - more lilting. 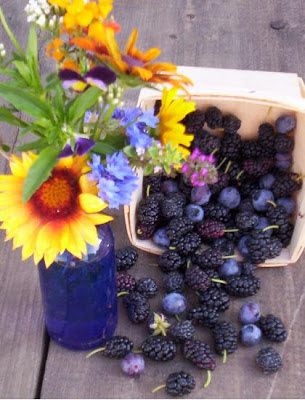 On this particular morning, I was possessed with the desire to go find some berries. The blueberries have been giving me a handful each day to nibble on while weeding. There was some discussion on The Essential Herbal Yahoo group the other day about mulberries, and that made me think of the tree just out by the end of the near field. That - of course - reminded me that Bob had mentioned that the raspberries were starting to ripen over on the edge of the next field. So, 6:45, basket in hand, I set out.

But to children (my sister excluded - she doesn't like them) they are a miracle! When Molly was a toddler, I could look out the kitchen window, and see a trail of clothing. That meant that I'd find her down by the mulberry tree. She was nothing if not tidy, and mulberries are very juicy. She'd be standing under the mulberry tree naked, eating her fill and singing to herself - smeared with juice from head to toe. The tree would be so laden with fruit that the boughs bent down almost to the ground. The best way to find mulberries is to stand under the branches where the fruit dangles under the leaves.

Just a couple years ago, a city-boy friend, who I happen to know LOVES berries told me he'd never had them. At that particular moment, I spied a tree just across the parking lot and swerved on over to pick some for him to try. They are a much under-rated fruit.
Mulberries can be used like any other berry, but has no tartness, so maybe a few drops of lemon juice might be required for some recipes. The stems are edible. Here's a recipe using mulberries along with other berries...
From Wild Foods for Every Table

Put berries in an ungreased 5 to 6 cup deep-dish pie plate and sprinkle with 3/4 cup sugar.

Sift together flour, baking powder, salt, and remaining 1/4 cup sugar into a bowl. Add milk and butter and stir with a whisk until smooth, then pour over berries.

Bake slump in the middle of the oven until the top is golden brown, 40 to 45 minutes. Transfer to a raack and cool 20 minutes. Serve warm.

Along the way this morning, I picked some wild flowers. There is a whole drift of them that were planted last year, and have spread and continued to grow. The coreopsis and blanket flower have done the best, but blue cornflower, flax, heart's ease, batchelor's buttons, yarrow, and poppies didn't do too shabbily either.
It was a glorious stroll. The neighbors weren't up yet, and the dogs didn't notice me. At some point, I rounded a corner and surprised the guinea hens. Sensing the quiet of the morning, they didn't even set up their usual squawking.
There are a couple other flowers I snapped along the way. The first picture is Lupine. These are sweet spires of various colored flowers. Very striking. After a couple of tries with these at the old house, I almost gave up, but these did ok, so maybe we'll have them around. There was a book we used to read at bedtime called "The Lupine Lady" about a woman who lived in a little town, and people thought she was odd and stand-offish. Her main activity was to spread lupine seeds, and at some point in the story the kids wander over the top of a hill and find lupine spires for as far as the eye could see, giving them a different perspective of the old woman.

Lastly is the picture of Blue-eyed Grass. I can distinctly recall the first time I ever saw this plant. It was growing along the side of the road, in a ditch on the dirt road leading to our house in VA. There were so many of them, and the color is so vivid, that I screeched to a halt. I may have screamed too... you'd have to ask Molly. We dug up a little clump to transplant by the door, but (of course) the goats ate them. So this year, Putnum Hill had the plant for sale at Landis Valley, and I scooped one up, feeling like I'd found a box full of sapphires. They've bloomed everyday since they got into the gardens. No goats - hee hee hee.
Posted by Tina Sams at 5:14 AM

mulberries are great, though I like blackberries way better (we dont have wild blackberries here though :( ) There are tons of trees along hte edges of our woods and I have been picking lots. Glad to here the stems are edible, as pulling them off is very tedious!

Great story about your daughter!! You painted such a lovely picture about her childhood joy. I also really like the photograph with the blue vase and the berries. :) 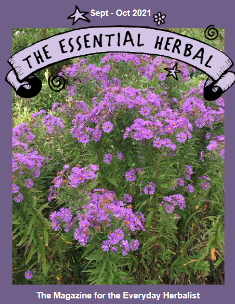