Karen and the turkey

OK, admit it. Every year, the same old turkey. I know it's a tradition, but if you're looking for something a little different and wonderful, read on!
After becoming "herbie", I decided that there was something sacrilegious about not cooking with herbs in everything I did. One Thanksgiving I decided to throw caution to the wind and experiment on my family. (Quite frankly, that was the beginning of experiments on my unsuspecting brood. They are all still my favorite guinea pigs!!)
Grabbing my helpless, unsuspecting Honeysuckle White from the water, I plopped it on the counter and opened up the herb cupboard. I was fairly new to herbs so I had a little sheet on the inside of the cupboard that showed all the things herbs go best with. I started scanning for anything that would work with poultry or anything feathered. There were several wonderful selections which all happened to be staring out at me begging for a culinary debut. 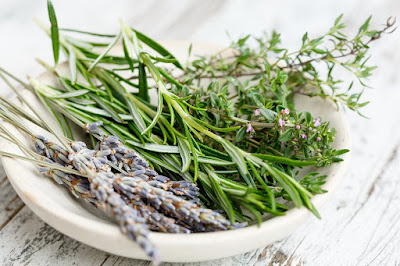 I started pulling out jars like a woman possessed. (If you've ever met me, I pretty much act that way all the time!) There was the traditional sage. Marjoram, rosemary, oregano, lemon balm, savory. As I stared at the collection of jars and bottles before me, that old overwhelmed feeling started in the pit of my stomach. Being seriously left brained, (I don't think I even have a right lobe at all) I am one of those cooks who follows a recipe down to the letter, so this was scary to say the least and on a level with jumping from a 100 foot building at most. But I was determined. I pushed on.
I thought perhaps the muscle test might work. You know, that thing where you hold out your arm and with the other hand hold something close like sugar and see how your body reacts when someone tries to push down on the outstretched arm? Well anyway, the turkey wasn't cooperating at all. I lifted a wing and held a spice close. No response. Hmmmm.
Finally I decided to get in touch with my creative side, whatever that was. I opened jars, sniffed, put two jars together and sniffed. This went on for 15 minutes. My husband walked in, took one look at me, shook his head and kept walking. (He's done that a lot lately, come to think of it.) Next the sons who, just because they are adults now and out of the house, think they know everything. ("HERBED Turkey? What the heck is THAT! Come on, MOM! Just make it the way you normally do!") But I was a woman on a mission. Can't be an herbie if you don't live it.
Finally, I decided on the sage, the rosemary, the marjoram and the oregano. Plus some chopped garlic I had handy. And of course salt and pepper. I poured some olive oil into a bowl. (Much healthier than butter, which Mom used to use to rub on the turkey). 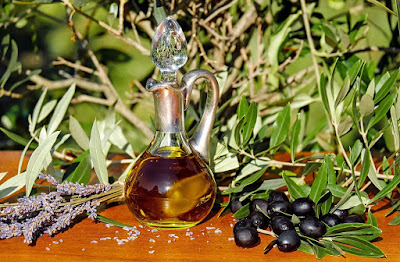 Then I added the spices. About 1/2 cup of olive oil. I purposely didn't measure, cause real cooks don't measure. (Wonder who came up with THAT lie?!) Then about a tablespoon of each of my selected spices. I mixed it up well and proceeded to pour a small amount into my hand.
As it dribbled through my fingers, (that move needs work) I quickly got my hands over the turkey and let it run out. Next I grabbed the bowl and poured a small amount on "Tom". Then I began the first avian massage. I worked and massaged until my 20 pounder was covered from neck hole to the part that went over the fence last as well as inside with my special brew. I convinced myself that this would also make the meat much more tender, so I put my whole heart and soul into it. I kept pouring and massaging until I had used up all the contents. There I stood, over my victim with my hands greasy and in mid air. (another confused but sympathetic look from my husband). Even if it didn't taste good, this was the most fun I've ever had preparing food!
We always stuff our birds, so that went in next. My loving hubby grabbed the bowl of stuffing out of the refrigerator and placed it next to the bird on the counter. ("Why don't you just wipe your hands off?") SNORT! Be CAUSE, I want all that nice mixture to get into the stuffing as well. Men! 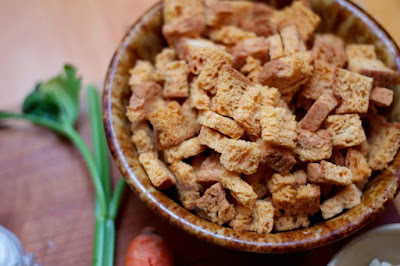 After stuffing every last bit into the cavity and the neck skin, Tom was ready for the oven. I put him in at 325 degrees with some foil over the top to seal in the steam. The house smelled heavenly and soon, men and dogs were wandering in to "Help with the basting"! (Where were these guys when I was wrestling this 20 lb slippery beast?) About 30 minutes before he was done, I took Tom's foil blankie off so he could get nice and brown. And then, the moment of truth. My husband proudly carved and everyone ooo'd and ahhhh'd at my masterpiece. I waited expectantly while everyone else dug in. tick tick tick tick. (Now I know how Alex Trebeck feels!) WELL?!!! Amidst grunts, slurps and nods, I got the message that the Herbed Turkey was a success. 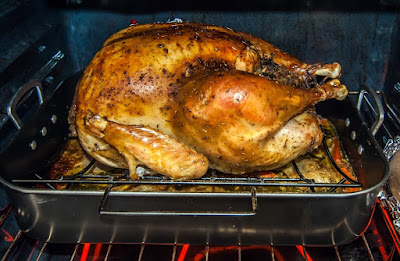 t was wonderful and tender and the herbs gave it a wonderfully subtle but delightfully different taste. I smiled happily as I spooned out some more stuffing. Wait a minute, what's that thing? Looks like paper. I pulled it apart from the stuffing. THE GIBLETS! (I wondered what had happened to those!) So, lesson learned. Make sure you do a thorough body cavity search before embarking on this adventure!
Bon Appetite!!

Congratulations on your turkey, Karen! I hope this years is even better.