Oh... this was one of my favorite concoctions so far! 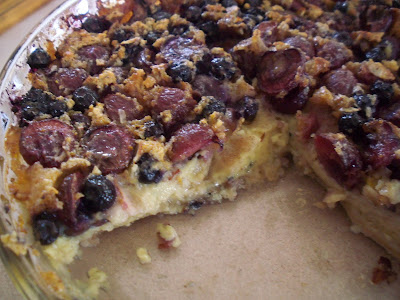 Prep time 10 minutes.
At our house, as the fruits become available, everyone brings them home. I'll come home from market with melon and strawberries, Molly will show up with cherries and blueberries, and then my sister will see a great deal on cherries and pick some up for me. Before you know it, we're in a glut, and worrying about using them up or preserving them. If you've been reading over past summers, you'll know that I am not a typical baker. There is rarely everything we need. We don't bake much. I just bought sugar after not having a bit in the house for months because we started doing kombucha again.
So yesterday I had a bunch of sweet cherries and 2 pints of blueberries threatening to turn.
In this area, we often see custard pies with berries floating in the creamy ivory filling. That was the vision dancing in my head. I went the Bisquick Impossible Pie route, using the recipe for coconut pie (without the coconut) and adding from there.

And here is where I started getting creative.
I threw in 1 cup of halved sweet cherries, 1/2 cup dried tart cherries, and 1 cup blueberries.
1/4 cup sliver almonds
the zest of one orange
1/2 t nutmeg
1 t cinnamon
1 t grated crystallized ginger

The only thing I might have added would have been more almonds - maybe almond meal. My sister doesn't like the texture of custard (?!?) and suggested some oatmeal, but that would ruin it for me.

Bake 55 minutes or until the crust is golden brown.
Delicious hot and/or cold.
Posted by Tina Sams at 6:45 AM