Mornings around here are usually pretty laid back. As I pushed back the curtains to let in the day, it was clear that this would be a beauty. Staggering out to the kitchen to start the coffee, the sun shining though the maple cast a decidedly autumnal glow in the room. 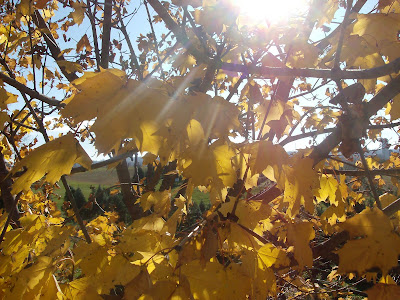 One cup down, and the sun pulled me outside to look around.
Fortunately for all of you, there is no picture of that. Various layers of seriously unmatched clothing, hair sticking out at odd angles, and that whole, "what? I just got up!" look combined for what I am certain would scare children and small animals. A lack of neighbors can do funny things to a woman.
There are still a lot of violets growing in the yard. Mostly violets work on seeds at this time of year, but there is always a very small fall bloom, making the beauty of those blossoms all the more sublime. 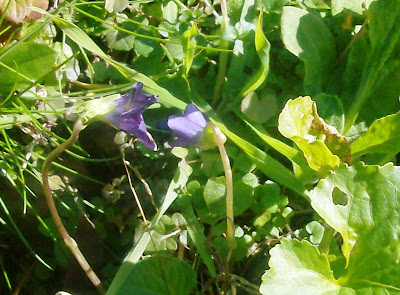 The leaves have left the fig tree, but there are a few figs hanging on. These are the sweetest of the season. The buds are already waiting for next spring, and I admire the strength of them. 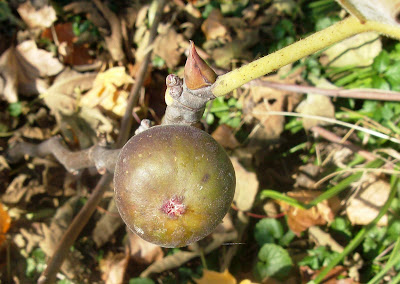 Blueberry leaves have a clear jewel-toned red that looks almost like fire at the far end of the yard. They are more striking than almost any flower that blooms in the summer, made even more so because they show this color when the landscape becomes nearly stark. 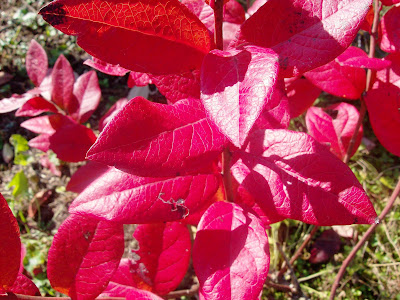 An echinacea somehow found her way to the back border from the front garden. The extended sunshine out back has suited her well. 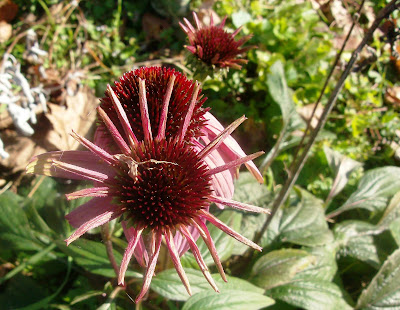 The vitex berries stand against the vibrant blue sky. I've harvested a couple of times so far this year, and will probably gather some more later today to start another jar of tincture. 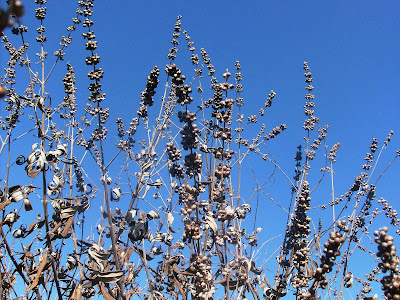 Tiny leaves of cleavers clump close to the earth. I adore the way this plant grows. Stem, then a row of leaves like a green flower, stem through the center of that, and it repeats all the way to the end. Even these tiny plants have that tacky feel when you run your fingers through them, the tiny prickles are already there. 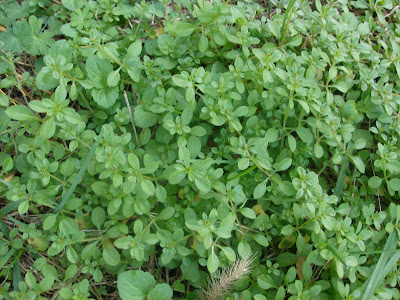 The shaggy cones of the Douglas firs are covering the trees. It is an odd year out there. Some of the conifers have lots of cones while others barely have any. Not sure what to make of that - particularly since we were so flooded during the woolie bear caterpillar time this year. Never did see one of them! Usually I combine what they look like with the cones to come up with my own personal forecast. 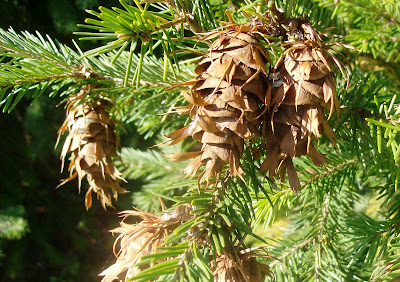 It's going to be a surprise, I guess.
I am THRILLED that this little stinging nettle plant is here. It is my third try at this plant, and the other two didn't pan out. This one is tucked in between the anise hyssop (could be a problem later since the leaves are vaguely similar...) and the porch so I can keep an eye on it. Earlier in the fall my brother-in-law lent a hand at the end of year garden chores, and this poor plant was whacked to the ground (along with my witch hazel and experimental hardy passionflower), but hopefully everything will recover with good strong roots. 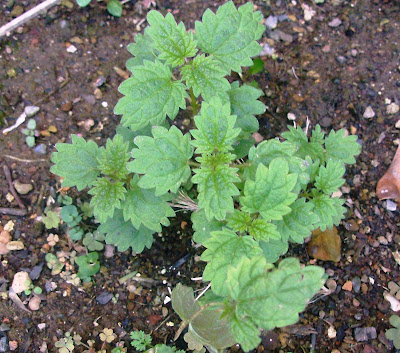 The Bradford pears out front will eventually be replaced by some useful trees. One of them was split during the hurricane this year, and they just aren't very strong. It would be better to have fruit or medicinal trees out there taking up space. In the meantime, I have to say that their foliage is a thing of beauty. So many colors and shades on a single tree. 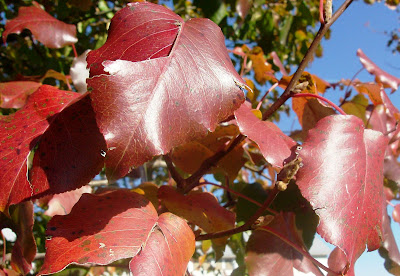 Next to the door, a barberry is a riot of reds, oranges, and yellow. A rusty colored mum plant struggles to compete. 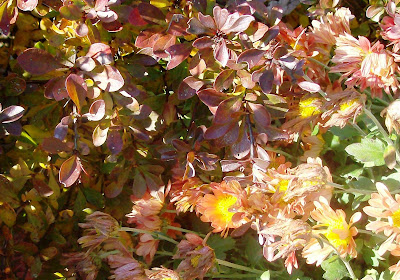 It won't be long before the yard turns a pale straw color and the sky tends to steely gray. Winter is coming. The tree fields here a filled with families choosing the trees that they will come back for in another few weeks to decorate in their homes. Each day is so very special right now, so filled with the last precious glimmers of plant life for the year before they snuggle down into their roots to regain strength for another growing season. As they do, in some ways we humans will do the same. We'll settle in for the winter, planning and regrouping, learning and studying, so that we'll be ready for them when they return.
Posted by Tina Sams at 8:02 AM