These neck coolers are one of the easiest ways to keep cool in really hot weather when you need to be outside, or just need to cool down quickly.  We’ve used them at outdoor shows or in the garden, and the relief is pretty amazing.
With the heat wave that has been going on in many parts of the country, and is now heading eastward, I thought I’d share this craft.  Now, understand that these can be found for sale – On our website.  But… it’s the kind of thing you can make a dozen of for just a little money and time (although not as nicely done), and throw into the cooler with the beverages during the upcoming holiday.  Having plenty of them will mean that they can be worn until they start to warm up, and then switched out with another, icy-cold one.
You’ll need some polyacrylamide crystals, marketed as root water crystals in the garden centers across the country, and some fairly closely woven cotton material.  Old sheets that have worn spots would be great for this purpose. 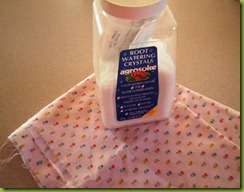 I’ve whipped one up by hand because I know not everyone has a sewing machine.  You will probably notice that I’m not terribly particular about measurements either.  The only measurements that really matter are that:
*the scarf is long enough to tie loosely about the neck
*the pocket that holds the crystals is only about 5 or 6 inches wide
*do not be tempted to use more crystals – you’ll burst the seams
Start with a strip of fabric 40” long X 5” wide.  Fold it in half lengthwise, and sew it into a tube. 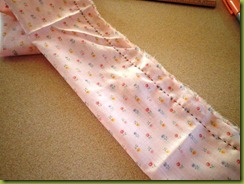 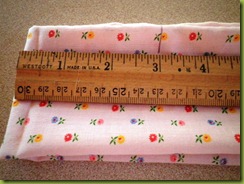 Sew ONE of those lines, widthwise. 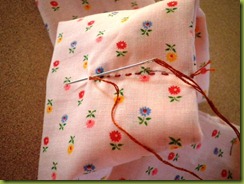 Add one teaspoon full of the crystals. 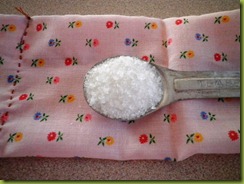 Sew the other line, forming a packet that holds the crystals and reinforce the seam that runs lengthwise so that the crystals stay inside. 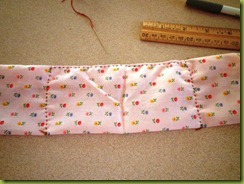 If you’re hand-sewing, these three seams are the most important to use very small stitches on.  The long initial seam isn’t too important, it just forms the tube.
You can then finish off the ends of the tube by turning them in and hemming.  Doing so at an angle is a nice touch.
Submerge the neck cooler in cold water for about 15 minutes, and apply.  It will stay cool for quite a while, and when it starts to warm up, flip it over for further cooling.  Throw it back into the cold water and it’s ready to use again.  It will be about 3/4 – 1” thick in the pocket. 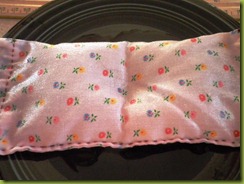 These are reusable until the cloth wears out!  Just allow them to dry naturally.  The crystals release the water and return to their tiny dry selves.  Until you need them again.

With this 101 - 104 temps that we are suppose to be getting tomorrow this would be perfect! Thanks so much for sharing.

Colorado is burning up right now. I think this would be wonderful to help cool us down :)

This is such a great idea! But I don't have time to do this much sewing right now. However, as I read your blog post, I realized that I can make do for now with a damp hand towel draped across the back of my neck. Thank you for suggestion - indirectly. It should help a lot in our Chicago heat wave, especially since I'm in an older apartment with no air conditioning!

O wow! I need these! Such an awesome idea. Thanks for posting.