Letting out a long sad sigh here.
Last year the timing of the weather here destroyed our elderberry crop.  I should have paid attention then, and watered it when it was dry.  The dry spell hit just when the berries were forming, and the stems leading to the umbels dried up, leaving small bundles of tiny brown dried up balls.
Elderberries have always been a carefree crop here.  Aside from the fact that the stinkbugs have found the umbels to be a hospitable resting place and probably ruin a few berries along the way, nothing has bothered them.  Until this year.
This year it seemed that the bushes were just knocking themselves out to make up for last year.  They were covered with layers of frothy umbels. 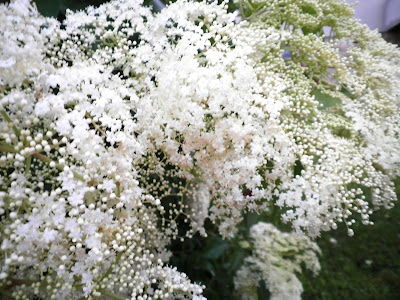 At a certain point the branches of tiny green berries became so heavy that we did some fancy weaving inside the branches to hold them up off the ground. 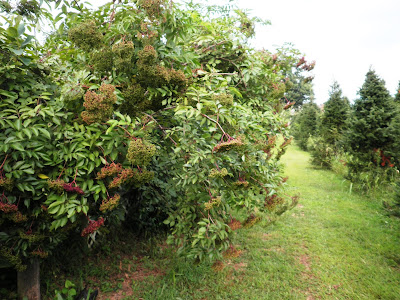 Shortly after that, I started to notice that when I touched the berries, swarms of tiny bugs emerged and berries, ripe and unripe, fell to the ground.

About that time, my friend Barb Will wrote to ask if I knew what would be causing tiny white worms in their berries.  I'd never heard of that. Since then, I've heard from people in various parts of the country who seem to be having the same problem - as am I.
The umbels have not ripened uniformly.  Some berries around the outer edges ripen, but burst when picked - if they don't drop as soon as you touch them.  The area around the bushes smells strongly of fermenting fruit.  Early on I got enough to freeze a couple of quarts and make a gallon of mead.  Then I gave up and ordered some dried berries.

So today I posted a picture of some berries on The Essential Herbal's facebook page.  We commiserated, and then Denise C brought up the spotted wing drosophila.
A quick search brought up a page from Cornell University.
"The spotted wing drosophila is a vinegar or fruit fly of East Asian origin. It has been in Hawaii since the 1980s, but was first discovered in California in 2008, and Florida, Utah, the Carolinas, and Michigan in 2010. It has many hosts, but is most often attracted to grapes, cherries, peaches, blueberries, raspberries, strawberries, and other soft-flesh fruits."
Now we really have a problem! 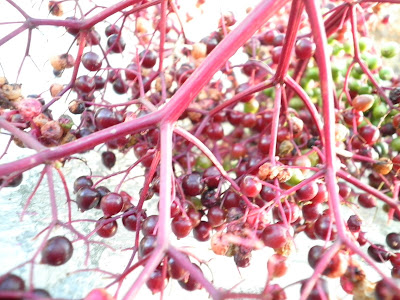 I opened several berries while outside earlier, but didn't find any worms. I have seen them, though. The page talks about natural management.  Vinegar traps.  I think that cutting and burning affected umbels *might* help.  Keeping a close eye on the plants has become a necessity.
No longer an easy, carefree crop, but such an important useful plant.  Next year we'll have to try some experiments.
Posted by Tina Sams at 4:27 PM

Oh no :-( What a disappointment.

I think I lost my elderberry this year, Tina. It flowered and then when I went back to look at it after flowering a large portion of it had died all together. It was a tough year!:(

I just tinctured my second picking this evening. I tried to air dry the first picking but they rotted before they could dry, :-( I was hoping for tea fixings but I will settle for medicine.

I'm always really envious of people who have "carefree" elderberry plants. They struggle with me in Australia!

Tina, this is terrible. I know how much you use your elderberries...and I've enjoyed their bounty in the past. I suspect ordering dried SOON is in order...if everyone's crop is affected there will be shortages.

http://www.lohud.com/article/20130906/LIFESTYLE01/309060046/ (shared by Stephany Hoffelt on Facebook) suggests an organic pesticide containing Spinosad along with vinegar traps as a means for control.

Just noticed that this was from last year, however, these same pests seem to have made it to Pennsylvania. Bagged 14 quarts of berries, did not see anything while stripping off stems, but as I went to put the bags in the freezer, there were literally hundreds of small white worms in each and every bag!! So mad I could just spit!!!

Yep - we're near Lancaster, and had them last year. This year we did a lot of pruning and harvested a little early - so that luckily we managed to get a few gallons before they set in.

I have huge elderberry trees/bushes in my front yard that I planted over five years ago. Right from the start I've had those white worms every time I process my elderberries. My bushes are huge and very healthy. I get an over abundance of berries. Every time I strip them, I see no insects or worms. Yet when I start to cook them, they are there. I've learned to just strain the juice through cheese cloth. They haven't effected the quality of my juice or my jam. Yes I hate them, but otherwise my berries are healthy looking. I guess being an organic farmer I'll just have to continue to put up with them. 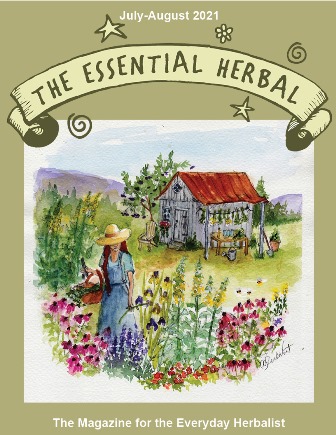