The bananas on the counter took a turn for the worse a couple of days ago, along with a golden delicious apple that had taken on a rather wrinkled appearance, so while the boys were plowing and shoveling out front yesterday, I thought I'd make them a treat. 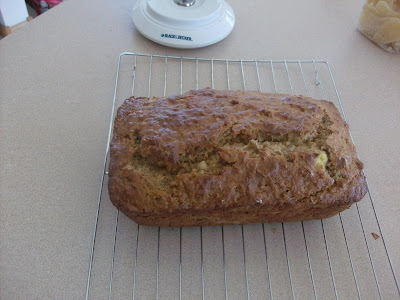 I mashed up two of the bananas, and processed the apple with a handful of walnuts and a few slices of crystallized ginger, then loosely followed the recipe for Banana Nut Bread from the Better Homes and Garden New Cook Book.
After the bananas, apple, ginger, and walnuts were mixed up, I added:
a generous tablespoon of cinnamon
2 eggs
2/3 cup of sugar
1 tablespoon of soft butter
2 tablespoons of milk
Mixed that all up well,
Then:
1/2 teaspoon baking soda
1 1/4 teaspoons baking powder
2 cups flour (if I had some quick oats, I may have replaced a cup of flour with that)
It all went into a greased loaf pan, and baked at 350 degrees for about an hour. It could have used a few more minutes, because the center was a little too moist. It was delicious. A great way to use up some of the fruit that was taunting me.
And just because it is so amazing, here's another view of the backyard - with sun added, making it appear less ominous. 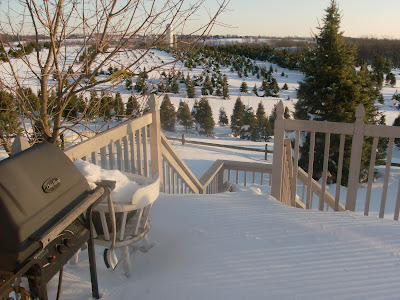 Note the railing just in front of the trees in the center of the picture. That is a split-rail fence, nearly 4 feet high.
Posted by Tina Sams at 5:51 AM

I just can't believe how much snow you have!

Hi, I tried this bread, and it was AMAZING. Thanks so much for the recipe. It is a firm favourite in our home now, two loaves later! I made a few changes to suit what I had in my cupboard and wrote a blog about it too (and referenced you of course!). Many thanks. We LOVE it!