My Very Own Horseradish - first harvest

Several years ago a friend sent me horseradish roots.  I managed to kill them, although many say this is neigh on impossible.  Then in 2011 when horseradish was the herb of the year, it seemed fitting to plant some (again) and into the ground it went.
This year, I was making some of that wild fire vinegar that goes by many names - Fire cider, Cyclone cider, Master Tonic - whatever.  It's filled with garlic, onions, some hot peppers, horseradish, and I also add about 1/4 - 1/5 raw honey.  This year, everything that went into the apple cider vinegar was homegrown or a gift from someone who grew it except a little turmeric.  A little bit of this stuff pretty much scares the viruses right out of you.  I really like that. 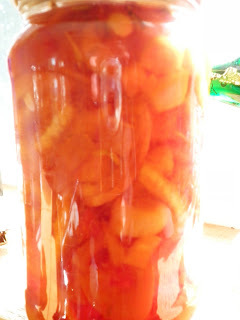 So anyhow... back to the horseradish.
Wait.  First I have to show you this cool shovel.  If you've ever found yourself hopping up onto the shovel to get it into the ground, and then hopping up again as if you're swinging from a playground pole and not making much headway to boot - this is a great shovel (made for women) that comes in 3 different lengths.  It is AWESOME and comes from Green Heron Tools - a small, women-owned business here in my home state of PA. 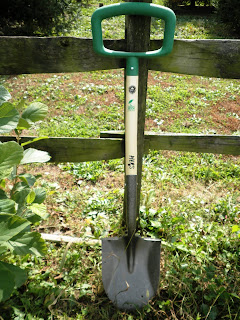 Okay, so out I go to dig up just a little bit of the root.  Pulled up two of the four crowns in no time and returned most of the roots to the ground because I didn't really need or want much right now. 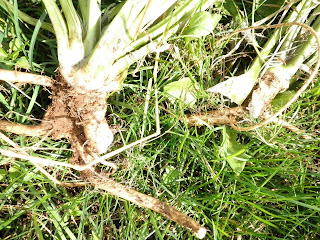 I have to tell you that when asking the circle of herbies how to process horseradish, my friend Lou said that she dons (did she say gas mask?) eye protection and gloves, and takes the whole kit and kaboodle outside.  She's a hard working lady, so I really should have listened.  Really.  But no.  It's only a little, right?  Well grinding it in the kitchen made that area of the house a biohazard for about an hour while things settled down.  Smells good, but wickedly strong.  The oils in the fumes burn the eyes.  Outside next time!

Here's what's left after the rest went into the vinegar.  We're set for the year. 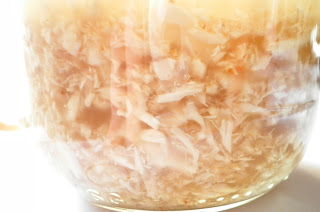 I found a bedraggled horseradish plant last year at the end of the year clearance sale for $1. I got it and planted it. Amazingly it survived. I didn't harvest any this year but I'm thinking maybe next year...
Good to know about processing outside. I remember my parents having home processed horseradish but I don't remember the processing. Maybe it was outside so that's why I don't remember it. Probably if we had needed a gas mask inside I would have remembered!
Judy

I was just looking at ours today. I need to harvest some horseradish and put it up while it's still pleasant outside. I was warned ahead of time years ago about grating it outdoors. Even so, it still cleans out the sinuses like nothing else!

I just simply like your healthy blog :) Thank you for sharing.