Each year when the butter-yellow crocuses bloom out front, the vision sets into motion a chain of thoughts.  It takes place in about 3 seconds altogether, and leaves me smiling and shaking my head. 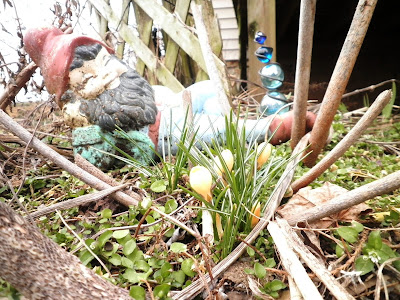 It starts with the warm thoughts of love when I see the flowers and think of my mom planting them with my sister.  And then I glance at the gnome.  I'm really not a garden gnome "type" but if gnomes played basketball, we'd have a team in the gardens.  My mom had a year while that was her thing; painting greenware gnomes.  Whether I like it or not, 8 years later I still can't bring myself to take them out of the gardens here.  They might move to a new garden or make room for a new planting, but they remain.  They are such a funny reminder of one of her quirks.
Back when we were all little and there was no money, she learned to make do.  Lots of people do that, but it was a fairly dire situation and making do meant developing a kind of tunnel vision that let her only see what was okay while ignoring everything else until we could get to that.  It meant that she almost always settled for less than she wanted or needed.
Later, when things got easier, this manifested in a way that we children didn't understand until she was gone.  We just teased her about it without understanding.
One year tiny televisions hit the market.  She wanted one.  It's hard to explain these things to people who grew up with Igadgets, but these little tvs were a huge deal.  The smaller the better, and they ranged from about 5 x 8 to the size of a business card.  You couldn't actually see anything on them, and they worked with mirrors, but they were hot at the time. So began Mom's quest to get the perfect mini-tv.  Or as we liked to call it, the year of, "Mom!  What are you doing with all these little televisions?"  Years of settling meant that she would see one almost like what she wanted, and buy it.  Then she'd see another that was closer to what she wanted, and buy it.  Ad nauseum.  The thought of returning any of them never dawned on her.
About the time the telephone monopoly broke up, telephone design became a big thing.  Up until then, the telephone company typically provided customers with telephones for a very minimal monthly fee and people pretty much contented themselves with being able to choose between a few colors in one or two styles (Princess phone, anyone?).  Well.  This was another year-long fixation for Mom.  It got to the point that we'd go home to visit and Mom would say, "Couldn't you use another phone at your house?"
Her final extravaganza, and one we had a lot of tender laughs over after she died, were the wrap-around black sunglasses one acquires after cataract surgery.  I swear, the woman bought them by the gross.  A pair will still pop up from time to time, and at a recent eye appointment when my pupils were dilated, I took a pair along and drove my sister (who took me) crazy by keeping them on in the grocery store afterwards.  We both bear a strong resemblance to Mom.
So this is why I keep the gnome colony around.  They are such a humorous reminder of her and who she was.  She took our ribbing well for a long time, but towards the end took it as criticism.  I'll bet she'd never have thought the gnomes would still be around.  Now if I could just get a tiny pair of black wraparounds and a teeny tiny television and phone - it would be perfect.
Posted by Tina Sams at 9:27 AM

How sweet! I bet they actually look cute. (and I'm snickering, imagining you in those huge glasses) My grandparents had both yard gnomes and those glasses, so I share your sentiment.

The sad part is that I really REALLY liked wearing those glasses. I found that for one thing, people didn't look at me, and for another it is like you are completely protected and apart. Like an invisibility cloak.