It's hard to believe, but when I started thinking about telling this story, it suddenly hit me that it's almost 20 years old.  It seems like only a couple of years ago, but then I remember that good old Tiny has been gone for 5 or 6 years now.
The story starts with a 3 year old Molly hiding behind a chair crying inconsolably.  When I could finally calm her down enough to tell me what was wrong, she told me that Daddy had been telling her for a while that if she was a good girl she could have a puppy.  Since she'd been trying to be a good girl and there wasn't a puppy, it had to mean she was a bad girl.
So that very late September afternoon Daddy was sent out with orders not to come home without a puppy.  That's how Tiny came to be a part of our family.  She was supposed to be a medium sized dog, but turned out to be mostly German Shepherd.  She was a terrific dog with a huge heart, and protected Molly fiercely on more than one occasion, for which we were thankful. 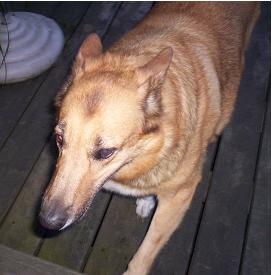 Tiny was also very clear about the boundaries of our property, and ran loose without our worrying.  I'm not sure if she was still under a year old or if it was the following year, but one night she wound up on the back porch whimpering and scratching at the door.  We could smell her before we heard her.
Fortunately, my sister had been through the same thing before and gave us this simple recipe:

Keep these ingredients on hand at all times because it needs to be mixed at the time of use to work.
It works on contact.  We took Tiny outside under the back porch light and scrubbed her down, very carefully around her face (where she took the brunt of it) and then hosed her off good.  Poor thing.
Now you'd think that would have taught her to stay away from skunks, but that was not to be.  Over the next 3 weeks she did it twice more.
After that she perfected her technique of sneaking up on them and was never sprayed again.
This time of year, if you have a dog that runs loose at all, you need to keep this recipe VERY handy.
Posted by Tina Sams at 5:43 PM

I can vouch for this recipe! Our neighbor has two big Labs that got skunked, and their people weren't home when it happened. So we washed the dogs down with Tina's recipe. It is in the Essential Herbal Book, "Under The Sun", which has a kajillion other wonderful recipes in it, too!


The skunk spray really works! Two big labs live next door, and when they got skunked I remembered having read this remedy in The Essential Herbal book, "Under The Sun". I ran inside, looked it up, mixed it up, and within 5 minutes the skunk smell was GONE. Amazing!

This is great to have. I am moving up North in a few months to a more rural community and we have a dog. I am such a city girl and wouldn't know what to do if this were to happen.
Thanks!

I use a large tube of inexpensive whatever is on sale toothpaste.
The baking soda and peppermint in the toothpaste helps absorb and cover the the odour.
Toothpaste slathered on, left a wee bit and then lathered-up with some water before rinsing off. Worked like a charm.
My old lab would routinely get sprayed 3x a summer and always very late at night when I had no energy to be scrubbing an unhappy dog.
Also good to remove onions, garlic and fish odours from your hands when cooking or cleaning fish.
Cheers from Oshawa, Ontario Canada