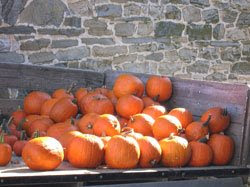 I thought I'd share a little something I listened to today from Cuddles the Vampire by Hippie Cream being as it is October. The drummer is one of my best friend's brother, and I really enjoy the way they use their voices and instruments to create a completely different sound. This one just cracked me up. Organized chaos has always been a concept near and dear to my heart, and now there is theme music! I've never posted music before. Hope this works.
I posted the following to The Essential Herbal Yahoo group. Thought I'd repeat it for my fellow pumpkin pie and bread lovers (there followed some great recipes, including this one for Pumpkin Chiffon Cake, from Betty Pillsbury:
Yesterday found me visiting an Amish roadside stand, where I picked up a pumpkin roll - moist, spicy cake rolled around a cream cheese filling. It got me thinking about medicinal uses for pumpkins. I love pumpkin pie, bread, and whoopie pies (gobs to some of you), so thought it would be nice to find a GOOD reason to dig in.
Their deep orange color denotes the presence of loads of beta carotene and they are full of lutein (good for the eyes). A little sniffing around turned up articles that say the oil made from the seeds is being studied for prostate health, particularly in conjunction with saw palmetto. The seeds (pepitas) are also a folk remedy for depression, and in larger quantities, parasites and kidney stones.
This article on the use of pumpkin extract in diabetes and pre-diabetes was interesting:
"A new study from China reveals pumpkin extract regenerates damaged pancreatic cells in diabetic rats, which boosts levels of insulin-producing beta cells and insulin in the blood. The diabetic rats had only 5 percent less plasma insulin and 8 percent fewer insulin-positive beta cells compared to normal healthy rats.
Researchers say pumpkin extract could benefit both pre-diabetics and patients who already have the disease. They note diabetics will probably always need insulin injections, but the extract could drastically reduce the amount of insulin they need."
https://search.ivanhoe.com/channels/p_channelstory.cfm?storyid=16600

So. Now we can feel good about these scrumptious fruits/vegetables.
Posted by Tina Sams at 2:59 PM