The days are going by so quickly here that there is scarcely a moment to see what the camera captured and report in on how things are going. So I'm squeezing this in between the 21 craft day entries.
Part of the pleasure of having a blog is how easy it is (and surprising sometimes) to look back and see where things were last year, the year before, and so on.
This past week should be recorded as one of the gloomiest I can remember! The weather stunk. It rained and rained until finally on Thursday an enormous storm hit a vast part of the eastern US. There was snow in Louisiana and massive ice in New England. Parts of the north east will be without power for several days.
Here in Lancaster County PA, all is well now. The ground is sodden, but it stopped raining and the sun has come back.
So before all that happened, we had a gorgeous weekend. There were so many people walking over the hillside choosing their trees that we didn't have more than a minute to talk to anyone.
On my way down the hill to get to the shop, I snapped a couple of pictures. The first is some wild grapes on a waist-high tree stump. I just love the vibrant colors of the moss and the curli-cues of the grapevine. 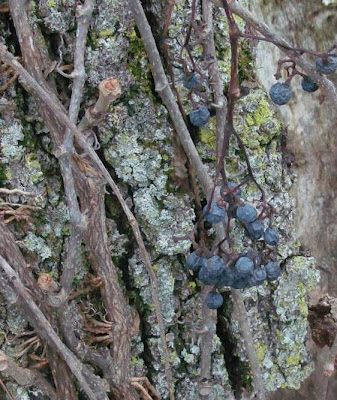 Then, it appeared that some confused hen or duck had been dropping eggs beneath this fir tree... until I noticed the two collapsed "eggs" off to the side. These are some sort of fungus/mushroom. 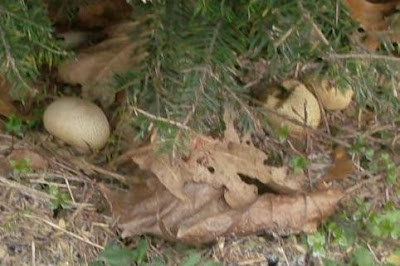 As I get closer, things are starting to hop at the farm. Rudy is on the alert, and knows where EVERYONE is at all times. The green Frogmobile is his particular target, and never leaves his attention. 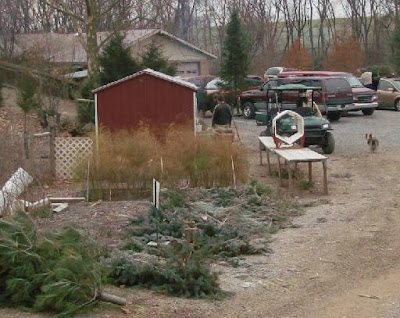 The last picture is a project I was asked to do for a ... okay... I'll just say it... for a STAR!!! She wanted a couple of aromatherapy kits for friends. Inside are 10 different oils - some in small vials, some in slightly larger bottles. There is a bottle of a carrier oil, and some fun containers (spray bottles, roller bottle, corked vial) to use with their own creations. Since they have to ship to the big city, I made up a sort of potpourri with some of the ingredients that are represented by the essential oils in the kit (and a few that are not) and used that to cushion the bottles inside the jar that is being used to hold the whole kit and kaboodle. 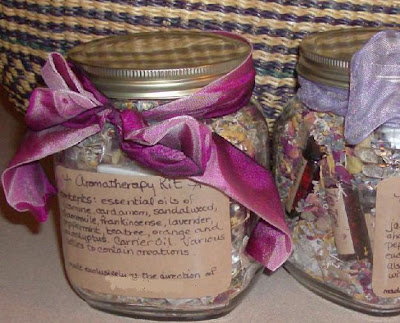 Now that was fun. They can go into the mail on Monday and almost everything will be done then.

Anything for Miss Laura!

Love the idea of using potpourri to help in packaging. Very creative!
Peace and Blessings!

I hope you didn't get this three times but those fungus/mushroom eggs look like Puff Balls though in there late stages because there dingy and yellowing. The fresh aka new growth are very white little coloring on top. I had a HUDGE one in my yard it was cool.
Gabby

We do get tons of puffballs up here. They must like the conifers. Usually they're a lot bigger, but you know fungi... never predictable.

what a cool idea to make potpourri to cushion the bottles!

I had to tell you how much these gifts were absolutely ooh'd and ah'd over. Everything I got from you was an absolute hit! Thank you so much!